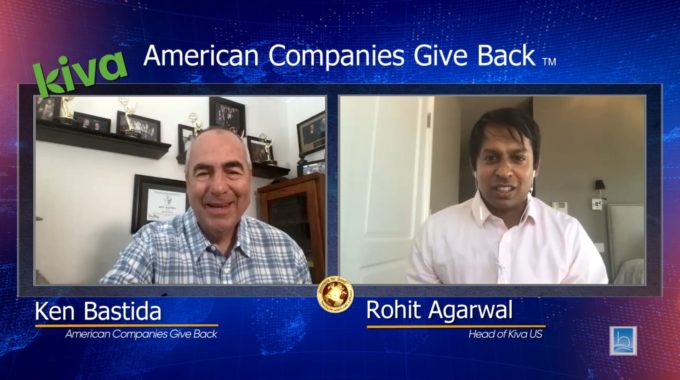 “American Companies Give Back” is a new video series produced by Emmy award-winning husband and wife production team, Steve Wynn and Joanie Burton Wynn. Everyone involved with the project is donating their time. Seattle production company Bayside Entertainment is contributing video editing services for the production. Each week, the series of short videos features a different US-based company and highlights its commitment to giving back.

American Companies Give Back: Kiva

“We’re a non-profit that seeks to distribute affordable capital around the world. We offer zero fees, zero interest loans. Our corporate sponsors are absolutely critical to Kiva delivering on its mission.”

Rohit Agarwal, Head of Kiva US

“I was familiar with Kiva’s international work and it was wonderful to share a story about support for US-based businesses who are struggling at this time. The story aligned perfectly with our video series goal because it exemplifies the spirit of corporate giving.”

One featured story in the Kiva segment is Oklahoma Distilling Company in Tulsa. Owner Hunter Gambill was able to use the fifteen-thousand-dollar Kiva loan to give back to his local community. As a result, he was able to ramp up the production of hand sanitizer and donated it to local first responders and the medical community.

“This is a perfect example of the ripple effect that comes from companies doing good. The corporate partners that donated to this fund benefitted small companies downstream, many of which used the money in positive ways to support their employees and local communities. In turn, we hope that by sharing these stories, the video production itself will create a ripple effect, inspiring others to give back.”

The virtually-produced video production features original Zoom interviews and footage provided by the featured companies. Each segment is about 5 minutes long. Bayside Entertainment coordinated the Kiva story with Hotwire Global, also a client of the production company.

Last week, the video series featured Credo, a clean beauty company based in San Francisco.  A portion of every Credo purchase is donated to their non-profit partner Lipstick Angels which provides cancer patients with free spa-like pampering while they are undergoing chemotherapy treatment. If you missed this heartwarming video segment, please take a few minutes to view it here:

New segments of “American Companies Give Back” are released each Friday. Upcoming segments include companies like Flir, MyndVR and Afar. Each video story focuses on the ways these American companies have committed to giving back. The “good news” clips are shared by Bayside Entertainment’s YouTube and Facebook channels. The videos are also shared on new streaming service IgnyteTV.

Journeys for Good , the Emmy-nominated program on volunteer travel produced by Bayside Entertainment, is seeking story…

We just wrapped 3 projects for Boy Scouts of America's national office in Dallas.  Our videos…