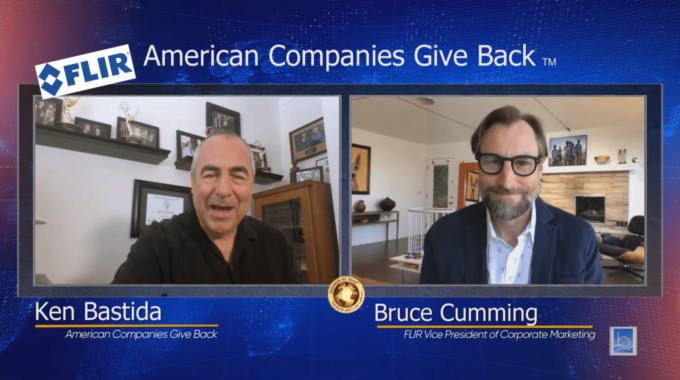 Our production studio, Bayside Entertainment, is producing a new series of video shorts, “American Companies Give Back”.  Each virtually-produced video segment celebrates US companies that make giving back a priority.

Executive producer Joanie BurtonWynn is pleased to share these uplifting video stories, especially at a time when good news can feel in short supply.

“This is our contribution to feel good Fridays.  We hope each story will leave our viewers with a feeling of hope and inspiration.”

As storytellers, our production studio is contributing our time and talents to tell these uplifting stories. To support the effort, the company is donating production and video editing services.

American Companies Give Back: FLIR

This week, our production company is highlighting FLIR and the ways in which they make giving back and integral part of their corporate culture. FLIR is a world-leading maker of thermal imaging technology. Their corporate social responsibility (CSR) strategy is called FLIR HERO.  It centers around charitable involvement in three areas: Planet, Purpose, and Potential.

“We were determined to do things where we knew we could make a difference.  Rather than just plunking dome money down for a sponsorship or something, we just felt like our technology was perfectly suited to these type of programs.”

In partnership with the World Wildlife Fund, FLIR technology is used to fight Rhino poaching in Africa. Along with the Zoom interview, our production studio was able to include riveting b-roll footage of rangers tracking poachers at night using the thermal technology.

FLIR donated more than 3 million dollars in thermal imaging equipment and training for deployment by rangers in game reserves across Kenya. Their efforts directly helped to cut poaching overall in half in those locations.

In every episode of “American Companies Give Back”, our production studio makes sure to highlight both international and domestic examples of corporate giving.

Within the United States, FLIR TradeForce is a program to help U.S. veterans transitioning to civilian life. Partnering with non-profit Hire Heroes USA, FLIR prioritizes hiring veterans and is donating over 3000 hours of free thermography training, valued at more than $294,000.00. This enables former vets to enter a skilled trade as a thermographer using the skills they learned at FLIR’s training center.

Additionally, FLIR has been instrumental in developing thermal imaging temperature screening to support safety during Covid-19.

Head of Production for the series Steve Wynn appreciates the many ways in which FLIR is contributing to the greater good.

“FLIR has shown a deep commitment to its CSR programs. It has consistently donated its technology, training and significant funding to support these worthy programs. We are proud to share their inspiring story as part of our new video series”

In addition to our original video projects and documentaries, our production studio provides turnkey corporate video production services for companies of all sizes. As the pandemic and sheltering in place continues, we are pleased to use our storytelling and video production skills to share this series of uplifting video segments.

Last week, we featured KIVA, a micro-lending platform offering financial relief to small businesses throughout the U.S. and worldwide.

If you missed that interesting segment, you can view it here:

Next week, travel media company AFAR is featured. Other companies featured in the video series so far include Credo Beauty, Wag!, DripDrop, and TCC. We hope that each inspiring segment will help to celebrate and promote companies that making giving back a priority.

Fundraising video is an essential tool for non-profit organizations, startups and crowdfunders.  Video can be used…